Callie McFee became estranged from her father three years ago. Buddy McFee, former attorney general and now fixer of problems, was investigated following an offhand remark Callie made during her on-air television job. Now fired from her job, she’s returned home, and the only work she can find is as a reporter for the weekly local free paper, a giant step down in life.

Her brother, State, is a police detective. Upon her return home, she has no place to stay so meets State to discuss staying at his house—with his wife and twin five-year-old sons. His meeting place of choice? The morgue. A college student was found raped and murdered, being dragged across a field by a man with a shovel. He refuses to give a statement but calls on Buddy for help. He’s the CEO of a large company and manages to keep his name off the police blotter and out of the news. 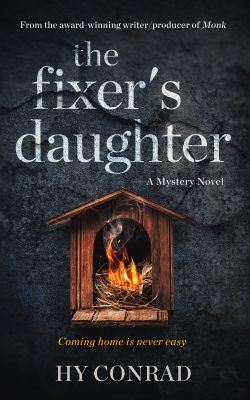 The worst part is, Buddy seems to be losing his edge. Is it merely age or early signs of dementia? Buddy is the keeper of secrets for many influential people. If word got out, there would be panic.

Callie inadvertently meets the college girl’s parents and that starts her investigation into the girl’s murder. She’s not done investigative journalism before and makes some errors but is generally on the right path and not afraid to take a risk.

To say much more would give away too much of the plot but be warned, just when you think you know what’s going on, the final twist will prove you wrong. The need to know that last piece of the puzzle will keep readers turning the pages to a satisfying conclusion.

Conrad is the author of three Amy’s Travel mysteries, four Mr. Monk books, and Things Your Dog Doesn’t Want You to Know: Eleven Courageous Canines Tell All, where the pups tell secrets like, “We are only wearing this stupid birthday hat so we can get some cake. No self-respecting dog cares about his birthday,” and “Moonbeam is not a dignified name for a mutt.” A must-have for dog lovers.