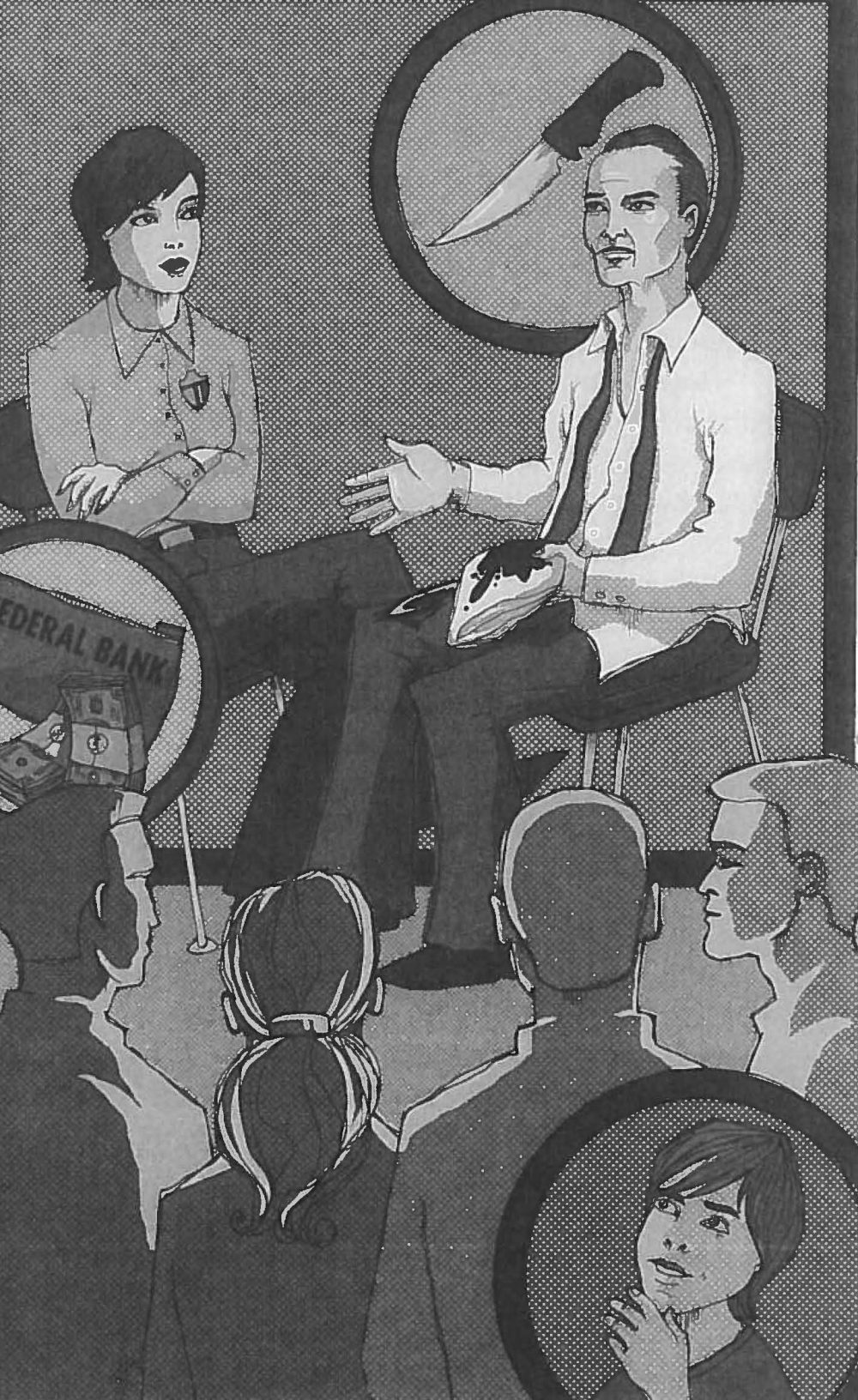 The art gallery owner sat in a folding chair in the interview room. He looked bruised and nervous as Detective Carol Bixby sat across from him and listened to his story.

“I just closed up the gallery for the night,” he told her. “We had a lot of cash in the register, very unusual for us. I wanted to get the money to the bank as soon as possible.”

“So you drove over to Beaverton Federal Bank,” Detective Bixby prodded.

“That’s right,” the gallery owner confirmed. “They have a walk-up night depository.”

“Did you notice that you were being followed?”

“No. Not until the other car pulled up and the guy got out. He was wearing a ski mask. I tried to get back in my car, but he was too fast. He pulled a knife, like a hunting knife, and demanded the deposit bag.”

“You shouldn’t have resisted,” Carol said. “You could have been killed.”

The owner winced and nodded. “I guess it was just instinct. I swung the bag at him. But somehow he managed to stab me.” He pointed to his right thigh. His pants were torn in a bloody slit, and under the slit was a flesh wound, perfectly centered with the slashed fabric.

“Anyway,” he continued, “I fell down screaming with pain. The guy took the bag and ran off.”

“What did you do then?” Carol asked.

“I got to my car and grabbed a towel from the floor.” He pointed to a hand towel, folded neatly in quarters, with a splotch of blood covering the right half. “Then I called 911 on my cell phone. Look, can I go to the hospital now and get this wound looked at?”

The art gallery owner, otherwise known as Detective Peter Pauling, smiled back, then stood up and faced the one-way mirror. “All right, rookies. You’ve just seen an interview with yours truly as a robbery victim. What’s your first impression?”

In the observation room on the other side of the glass, four rookie detectives sat in chairs, taking notes. Detectives Pauling and Bixby had found that this kind of class was the best way to teach observation techniques.

“You lied,” said one rookie. “You robbed your own store.”

“Good,” Detective Pauling said. “And what makes you say that?”

A second rookie raised his hand, before realizing they couldn’t see him. “The towel, sir. If you’d taken it from your car, it wouldn’t have been neatly folded. You obviously prepped the towel, getting it ready before stabbing yourself in the leg.”

“Excellent,” said Carol Bixby to the mirror. “Anything else?”

The third rookie spoke up. “It’s a big coincidence, saying this robbery occurred on the same day as a big cash deposit. Also, it seems kind of odd getting stabbed in the leg like that.

“Also, there were no other witnesses,” said the fourth.

“That’s good, but it’s circumstantial. Anything more concrete?” There was nothing but silence from the four rookies.

“Come on, guys,” said Carol impatiently. “I have a twelve-year-old son who’s more observant than that. Jonah!” she called out. “I’m sure you saw it. Why don’t you tell these officers what they missed?

The four rookies turned and for the first time noticed a twelve-year-old boy sitting in the rear of the observation room in the shadows.

WHAT CLUE DID THE ROOKIES MISS?

Jonah didn’t like being put on the spot. True, he had been paying close attention. These play-acting sessions were always fun. But someday he knew his mother would put him on the spot and he wouldn’t have the answer.

Jonah put aside his geography homework and walked toward the mirror. “Mr. Pauling,” he said into, one of the microphones. “Can you show us exactly how you were stabbed?”

Detective Pauling walked up to the mirror. He bent over his pant leg and showed them the bloody hole. Behind the torn fabric was just a glimpse of the fake wound. Most of it was higher up on his leg. The rookies all noted the difference.

“When a person stands up, his pants move lower down on the leg,” Jonah explained. “That wound was obviously made when you were sitting down. It was self-inflicted.”

“Perfect,” said Detective Pauling as he sat back down in the folding chair. Once again, the bloody gash became aligned with the hole in his pants, and he reached in and tore off the fake plastic wound.