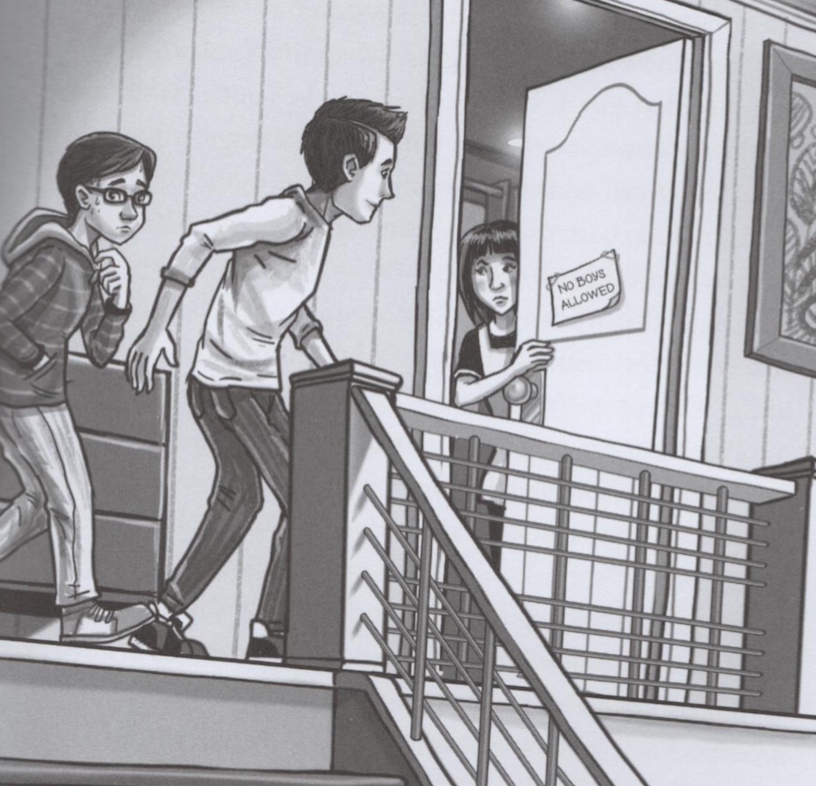 I’ve been in bed all morning. My nose is stuffed up and I’m sneezy and achy. But the worst thing is that it’s a Saturday and I can’t even take off a sick day from school.

Logan drops by my room to see how I’m doing. From the start, he’s being way too nice. “What do you want?” I ask. I can always tell when he wants something.

“You know Charlotte, right?” Charlotte Walker is the cutest, coolest girl in Logan’s class and he’s got a crush on her. “Well, she wants me to solve a mystery. I thought you could tag along, if you don’t have anything better to do.”

“Better to do?” I can barely breathe. “You just want to impress her.”

Logan doesn’t deny it. “Come on. I always want you to take the credit.” He breaks into a crooked smile. “Except maybe this time.”

I’m under orders to stay in bed. But we sneak out the back and make our way around the block to the Walkers’ house. Charlotte meets us at the door. “You brought your little brother?” she asks, making a face. I follow Charlotte and Logan upstairs, trying not to look deathly ill. There’s a sign on her door saying “No Boys Allowed”, but she lets us in anyway.

Charlotte closes her bedroom door and lowers her voice. “It’s my brothers.” She has three brothers. There’s Noah, who’s in high school. There’s Charlie, who is Charlotte’s twin. And then Sebastian, who is my age, two years younger than Charlotte and Charlie. “I always keep my door locked,” she says. “But one of them gets in anyway. It’s driving me crazy.”

“When was the last time?” asks Logan.

“This morning,” says Charlotte, “right before I called you.” She points to the mess of things on her dresser. “After breakfast, I came back and saw that my diary was in a different position and someone had spilled a bottle of my favorite body spray.”

Logan wrinkles his nose. “What do you want me to do?”

“My parents think I’m imagining it,” says Charlotte. “And my brothers just laugh. But everyone trusts you, Logan. I need you to find out who’s doing it.”

My brother is actually blushing. “Leave it to me,” he says. “Is Noah around?”

Charlotte points us to Noah’s room then goes downstairs while we start the investigation. Logan knocks. “What?” comes a sleepy voice that almost sounds like a grownup’s.

“Hi,” my brother shouts through the door. “It’s Logan, Charlotte’s friend. Can I come in?”

“No. Did Charlotte send you to grill me about her privacy?” Noah laughs. “The girl’s certifiable.”

It’s tough, questioning someone who won’t even come to the door, but Logan does his best. Noah claims that he’s been in his room all morning. “I had a late date last night,” he says, “and I’m sleeping in. Now go away.”

Logan doesn’t have any better luck with Charlotte’s twin. Charlie’s not in his room, and Logan calls him on his cell. The two of them are friends, so Logan can be a little sneakier. “Hey, Charlie?” Logan has his phone on speaker. “It’s Logan. What’s up? Wanna hang out?”

Even though they’re twins, Charlotte and Charlie are as different as day and night. “I’m at the library,” Charlie answers. He’s the studious one in the family.

“The library?” Logan is skeptical. “I didn’t think anyone used libraries anymore.”

“Well, my computer’s got a bug and I have to do research for a paper.” Charlie is half-whispering, which is believable, if he’s actually in a computer cubicle in the library. According to Charlie’s half-whisper, he was the first one up this morning and got to the library just when the doors opened at 8 a.m. Charlie is worried he’ll get yelled at by the librarian, so he cuts the call short.

There’s one last room at the end of the hallway. Sebastian, my classmate, is inside watching a video. “Hunter.” He turns it off, glad to see me. Logan and I sit on his bed. I let Logan do the talking, partly because he’s supposed to be the detective and partly because my head feels like it’s stuffed with cotton. Sebastian is smart and he can guess why we’re here. “Charlotte is so paranoid,” he says. “Like any of us wants to play mind games like that. She’s just doing it for attention.” Then he winks at Logan. “She likes you, you know.”

Like Noah and Charlie, Sebastian has a flimsy alibi. “I was practicing the piano and then I cleaned my room.” His room looks pretty clean, but then Sebastian is a bit of a neat freak.

After it’s over, Logan and I retreat into Charlotte’s room. Logan is beaming. “I know who did it. I’ll bet you never thought I’d say that, huh?”

“What?” I’m completely thrown. “How could you know?” It’s a real question. Logan and I were together for the whole investigation. Yet he figured it out and I didn’t. “Are you sure?”

“I’m sure,” says Logan. “But don’t feel bad. I have a piece of information that you don’t.”

“What information? Did you know something from before we started?”

“No-o-o,” he teases me. “We both heard and saw exactly the same things. We also tasted and touched the same things.” He pauses while I think. “Come on, Hunter. It’s as clear as the nose on your face.”

Do you have the answer?

WHICH BROTHER WAS IN CHARLOTTE’S ROOM?

WHAT CLUE DID LOGAN CATCH?

WHY DID HUNTER MISS THE CLUE?

As soon as Logan mentions my nose, I know. Logan must have smelled something that I didn’t, because of my cold. Then I remember that the intruder had spilled a bottle of body spray – and that Logan wrinkled his own nose in Charlotte’s room when he smelled it.

“It was Sebastian,” I deduce. “He’s the only brother we talked to in person. Noah never let us in and Charlie was in the library. You smelled Charlotte’s body spray on Sebastian.”

“I’d recognize her body spray anywhere,” Logan says with this dreamy look on his face. “And it was all over Sebastian. I win.” He pumps a fist in the air.