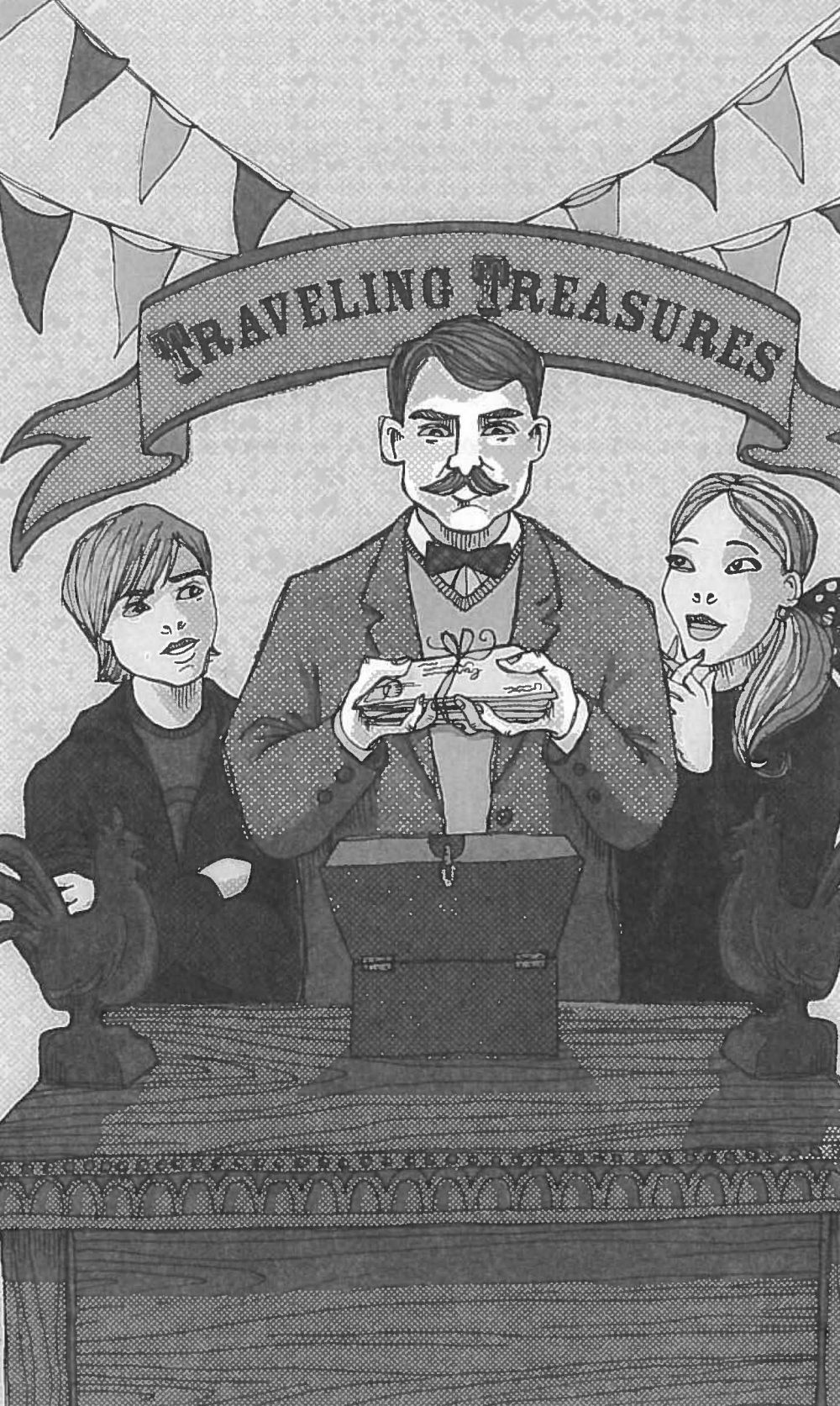 “Mom, please, I want to go,” Jonah insisted. “We must have something up here that’s old and interesting.”

Jonah and his mother were in the attic, searching through the piles of clothes and knickknacks and discarded furniture. Carol Bixby sighed as she dusted away a layer of cobwebs. “I don’t think Traveling Treasures is going to be interested in your father’s moldy neckties,” she said, moving aside a box.

“How about these bookends?” Jonah held up a pair of small iron roosters. “They’re old and ugly, so they must be valuable.” He dusted them off. “What do you say?”

Every Sunday night, Jonah and his mother sat down and watched Traveling Treasures, where hundreds of people brought in their family heirlooms and had them appraised by a platoon of experts. This week, the TV show was filming in Indianapolis, just an hour’s drive away. From the minute Jonah saw the announcement on the news, he’d been bugging his mother to go.

“All right,” Carol conceded. “It’ll be a nice day trip. But you can’t be disappointed.”

Jonah promised. He really just wanted to do it for the fun and the experience. But by Saturday afternoon, after driving to the Convention Center and waiting in four different lines, it was a major letdown when an antiques dealer from New York evaluated his rooster bookends. The pieces were late Victorian, mass-produced, and worth about ten dollars each.

“There weren’t even any cameras around,” Jonah sulked.

“They save the cameras for the good stuff,” Carol said with a smile. “Come on. Let’s see who got lucky.”

For the rest of the day, they wandered the hall, looking on as the resident experts appraised everything from baseball cards to gold chandeliers. Carol and Jonah were just approaching the exit when one particular item caught Carol’s eye. “Oh, look,” she said. “There’s a terrific desk. Let’s see what it’s worth.”

They stopped and watched as the furniture expert spoke to the desk’s owner, a young woman. “It’s an Edwardian piece,” he explained somewhat pompously. “Made in England. Fairly common.” He ran a hand under the front of the huge wooden desk. “I think it has a hidden drawer.”

“Really?” the young owner said. “The desk belonged to my great grandmother, and I never…”

She stopped in mid-sentence, surprised, as the appraiser lifted a small section of molding and a secret drawer eased open. He reached deep inside and pulled out what looked like a steel cigar box, secured with a rusty clasp.

“Oh, my,” the desk’s owner said. “It must have been in there forever and no one knew.”

Up until this moment, the expert had been looking bored. Now he was beginning to get excited. “Do you mind if I open it?” Without even waiting for an answer, he gently turned the clasp and lifted the box’s tight-fitting lid.

Jonah and his mother had a good view. Inside the small steel box, under a layer of dust, they saw a stack of letters tied with a red ribbon. “Love letters?” the expert joked. “Was your great grandmother involved in some secret romance?”

“Well…” The young woman seemed a little sheepish. “There is a family story that before she married my great grandfather, she was friends with the young Winston Churchill, but…”

Even as she said it, the expert was holding the pack of letters under a light and squinting at a handwritten signature. He gasped and nearly choked on the dust. Seconds later, he was squawking into his cell phone. “Get a camera crew over here. Station 16. We’re going to need a documents expert, too. This is big.”

“Love letters from Churchill,” whispered Carol. “Wow. Can you believe it?”

“I mean that woman planted the letters in that box and tried to make them look old. I’ll bet you anything they’re forgeries.”

HOW DID JONAH KNOW THE LETTERS WERE PLANTED?

A curious crowd was already gathering around the old desk when Detective Bixby leaned down to her son. “How do you know the letters are forgeries?” she asked. “Is it something about the desk? Or the handwriting? Or the postage stamps?”

“No,” Jonah had to admit. 1 don’t know anything about desks or Winston Churchill or stamps. And I don’t know for sure that the letters are forgeries.”

“So, what exactly do you know?”

“All I know is that there’s dust on them.”

“Of course there’s dust,” Carol said, trying to be patient. “They’ve been sitting around for decades.”

“I know,” said Jonah. “But dust doesn’t magically appear. Most dust comes from people, from dead skin. If the letters weren’t covered in dust when they went into that metal box, which seems unlikely, then where did the dust come from?”

“I guess you’re right. When most people think ‘old’ they think ‘dusty,’ but that’s not necessarily true.”

“It’s not true at all,” Jonah said. “Someone must have planted dust on those letters, someone who wants people to think they’re really old.”