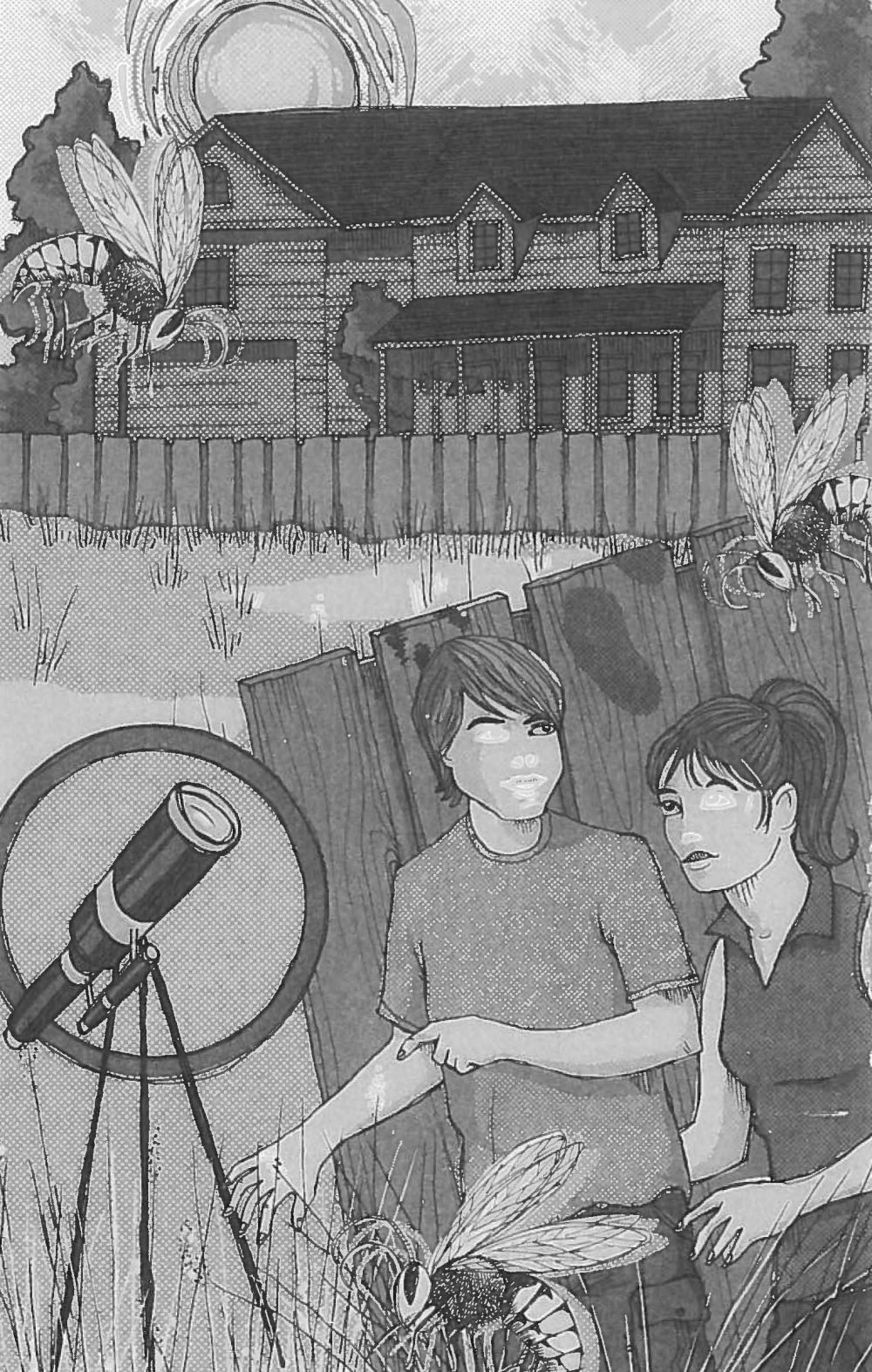 It was early August, one of the worst days of the heat wave, as Jonah and Sally Smith stood in the sweltering tree house in the Smiths’ backyard. They were staring at the spot by the window where the rusty telescope used to be. “Someone stole it,” Sally repeated for the third time. “My little brother said he saw someone out here this morning. Some kid.”

“That makes sense,” Jonah said. He couldn’t imagine a grown-up making off with the cumbersome old telescope. The detective’s son examined the tree house for a minute or so, then climbed down and inspected the ground around the tree.

“You think we should call the police?” asked Sally.

“Why don’t we investigate this on our own?” Jonah suggested. He knew the police wouldn’t pay much attention to a battered old telescope taken from an unlocked tree house. “It was one person,” he quickly deduced, pointing to footsteps in the dirt. “The thief dragged it over here and lifted it over your back fence.”

Sally bent down and saw the line in the dirt where the large telescope had been dragged along. On the top edge of the fence was a scratch of black paint and scuff marks from a pair of shoes. Beyond the fence was a vacant lot covered in waist-high weeds.

“He left a path,” Jonah said, pointing to the trampled trail curving through the lot. “Come on. Let’s follow it.”

He started to climb the fence, but Sally stopped him. “No. That lot is full of hornet nests. I got stung there last week— a huge, red, itchy welt.”

“Thanks for the warning,” Jonah said, studying the trampled trail from a distance. “The telescope was dragged through to Juniper Street. We’ll go around.”

They grabbed their bikes and raced each other to Juniper, screeching to a halt where the trampled weeds met the sidewalk. “He went this way,” Jonah said, following the almost imperceptible scratches in the cement. And then the tracks stopped.

“I guess he carried it from here,” Jonah said, a little disappointed. He stood in the middle of the street and looked at the surrounding houses. “Frankie Rooter lives right there,” he said, pointing to a two-story house.

“Frankie?” said Sally. “Didn’t he steal that baseball from Crazy Kate’s shack?” Before Jonah could answer, Sally was crossing the street. He had never seen her so mad. “Frankie?” she shouted toward a figure visible in a second-story window. “Give me back my telescope.”

Jonah could see a kid in the room. It was Frankie, all right. He had already heard Sally and was hurrying to open the window.

“What are you doing?” he shouted down at Sally. “You’re crazy.”

“You stole the telescope from my tree house.”

“That’s not what Jonah says,” Sally countered. “And he’s a detective.”

“Hey, I didn’t say it was Frankie,” Jonah protested. “All I said…” But it was too late. He could already hear Frankie rushing down the stairs.

The Rooters’ front door flew open, and Frankie emerged, putting on a light jacket as he stepped outside. “All right, Bixby, I’m sick and tired of you calling me a thief.”

“Well, you did steal that baseball,” Jonah hemmed.

“Hey, I gave it back,” he said, going nose-to-nose with Jonah. “As for your precious telescope, I didn’t take it. You want to call me a liar?”

Jonah swallowed hard. And then the answer came. “Yeah, Frankie, I think I do.”

HOW DOES JONAH KNOW FRANKIE IS LYING?

“What??” Frankie looked like he was ready to punch Jonah in the face.

Jonah stepped back. “Frankie, tell me something. Why do you have a jacket on?”

“Um…” Frankie didn’t seem to have an answer. “Because I feel like it.”

“It’s the hottest day of the year,” Jonah continued. “And yet you put on a jacket before coming outside.”

Sally scrunched up her forehead. “You lost me, Jonah. Wearing a jacket proves that he stole my telescope?”

“Well, it proves he was outside this morning and walked across the vacant lot. That makes him a liar and a prime suspect.”

“How do you figure that?” Frankie said. He folded his arms and winced a little as he did it.

“You’re hiding something,” Jonah said. “That’s why you put on a jacket before talking to us. And I think what you’re hiding is a hornet sting.”

“You got stung.” Sally broke out laughing. “You tried to steal my telescope and you got stung.” And then, just for good measure, she punched him on the arm.

“Ow!” Frankie doubled over in pain. “I got stung three times, all right? Go take back your stupid telescope. It’s nothing but trouble.”