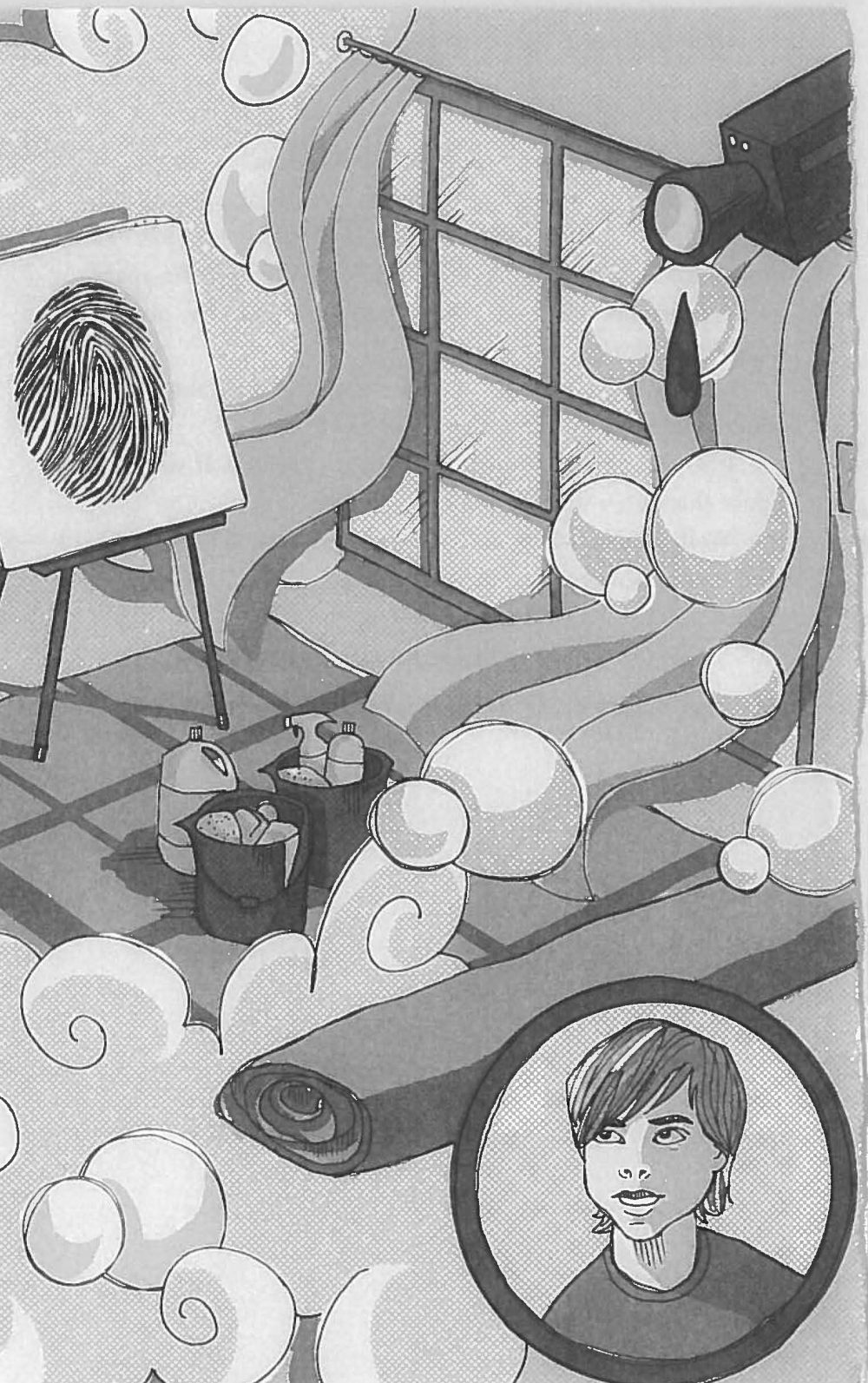 Jonah had been sitting at an empty desk in the police department bullpen doing his homework and feeling bored. And then Fred Coombs of the Crime Scene Unit volunteered to take him on a short field trip.

“I don’t like you being at homicide scenes,” Carol Bixby told her son.

“Come on,” said Fred. “It’s the cleanest homicide scene in the world. In fact, that’s our problem. We can’t find a fingerprint or a drop of blood.” There was a pleading look on Fred’s face. Carol knew how desperately he wanted to borrow her genius son to help him out.

She sighed and gave in. “Okay. Just this once.”

Thirty minutes later, Fred was leading the twelve-year-old into a bright, sunlit artist’s studio in an industrial building across town. As they put on their plastic gloves, Fred explained the situation.

“A young model is missing. Gina Washington. She was last seen walking into this building. She was coming here to visit Chester Hart, her ex-boyfriend. He’s a well-known artist. That was Tuesday around noon. A security video shows Chester two hours later carrying a rolled-up rug out of the building.”

“Wow. You think Ms. Washington’s body was in the rug?” asked Jonah, cringing at the thought.

“We do,” said Fred. “Chester returned that night with two buckets full of cleaning supplies. The security video shows him leaving the building three hours later. We think he killed her here in his studio. He came back to clean the place and did a great job. All we need is one of Gina’s fingerprints or a hair or a drop of her blood. Without that, we don’t have a case.”

“What did Mr. Hart say happened?”

“He says he never saw her that day. He says she must have come into this building to visit someone else. Likely story.”

The loft was a large, bright room with a small bathroom off to one side. There were various easels and unfinished paintings propped up against the walls. Everything else was spotless and white, from the light fixtures to the sliding dimmer switch to the bright, gauzy curtains.

“Were the curtains open like that when you got here?” Jonah asked.

“We didn’t change a thing,” said the crime scene technician. “The curtains were open and the lights were on. As you can see, there are no neighbors with a view of this window.”

Jonah nodded. “If he brought two buckets of cleaning supplies, there must have been a lot to clean up.”

“Well, he was thorough. No DNA, not a hair or fingerprint to place Gina here. We keep thinking he must have missed a spot, but…”

“I can think of one thing,” Jonah said, almost casually.

“Holy…” Fred couldn’t help himself. “I guess they’re right about you. I didn’t really believe it, but…”

“There is one thing he probably changed in this room between the time he killed her and the time he cleaned up. Maybe, just maybe, he forgot to clean there.”

Fred clapped his hands. “All right, let’s check it out.”

WHERE DOES JONAH THINK THERE MIGHT BE A SPOT OF EVIDENCE?

“Whatever it is,” Fred warned the young detective, “don’t touch it. That might contaminate the chain of evidence.”

“I know,” said Jonah, insulted at the idea. He wasn’t a child. When Ms. Washington got here, it was daytime, right?”

“Yeah. She must have been killed between noon and 2 p.m.”

“And when Mr. Hart came back to clean up the blood and DNA, it was night.”

Fred thought carefully. “The security camera saw him come back around 8 p.m.”

“So, the first thing he probably did was turn on the lights.” Jonah pointed to the sliding dimmer switch. “So…if you slide the switch down to the off position…”

Fred grabbed an evidence vial and tore open a swab. Then he held his breath and slowly slid the dimmer down. “Oh, wow.” There, in the center of the newly exposed piece of white plastic, was the tiniest drop of blood. “We got him!”