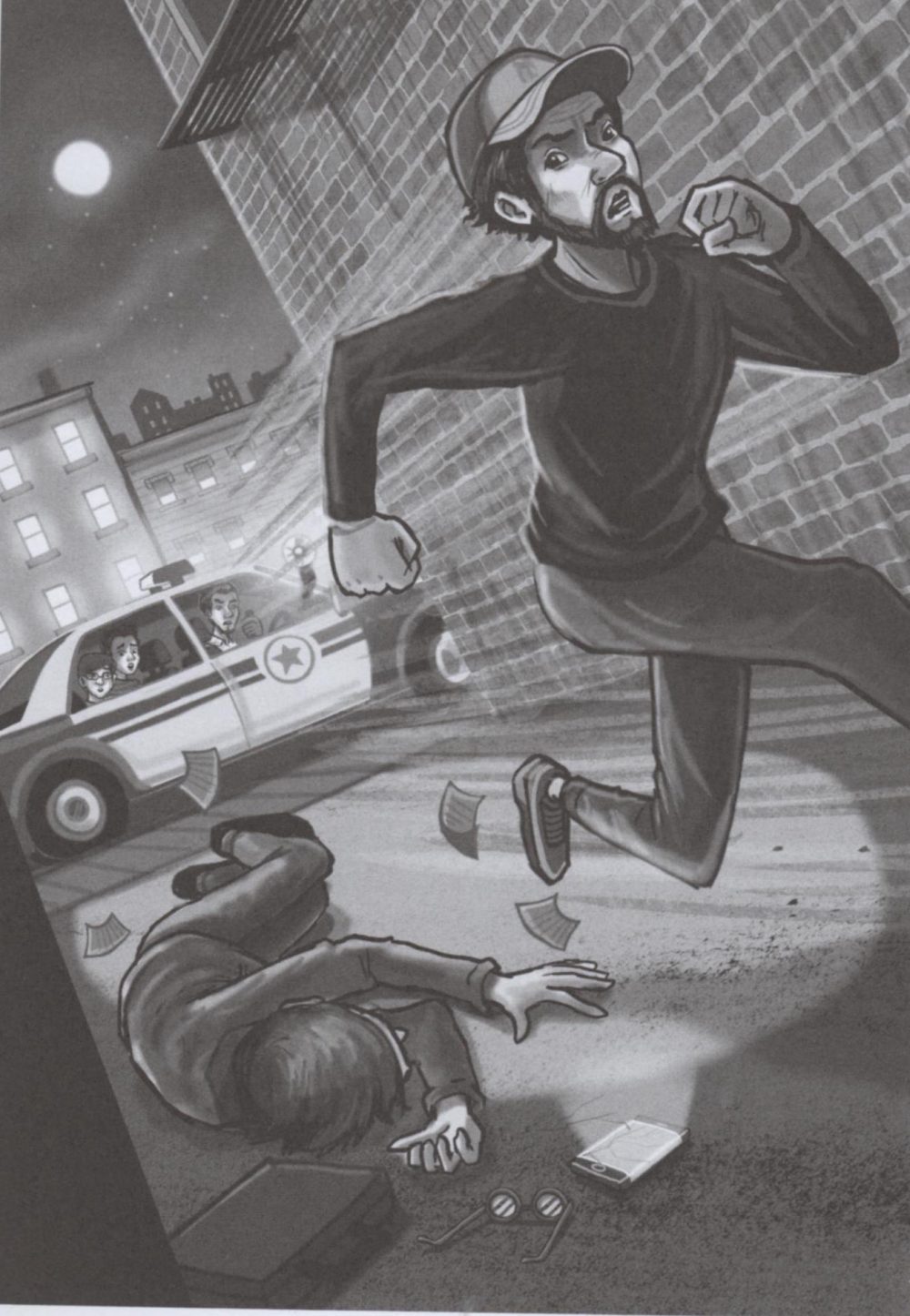 It’s not every kid who gets to ride along with a real cop, although crime-wise, there’s very little happening in Clifton Lake. So when Mom has evening business, Logan and I sometimes hang out with our uncle in his patrol car.

Tonight the Monroe boys are strapped in the back of Officer J.B. Monroe’s cruiser. We’re just rolling along the closed-up shops on Main Street, windows rolled down, when Uncle J.B. hears something and stops the car. We hear it, too, like a fight going on. Officer Monroe turns on his spotlight, focusing it down a dark alley.

The alley lights up and we see two men, one on the ground and the other running away. I try my best to be a detective, but all I can observe is that the running man is normal height, wearing dark pants, a black, long-sleeved top and a cap.   “Stay here,” Uncle J.B. says. Then he gets out, draws his weapon and starts talking into the communicator on his shoulder.

Logan and I are dying to get a closer look, but we stay put until the paramedics arrive and load the man from the alley into the ambulance. As they drive off, Uncle J.B. comes back to the cruiser. “It was a mugging,” he explains. “The victim had just taken cash out of an ATM. Someone came up behind him with a knife. You’re never supposed to fight when someone mugs you. But he put up a fight.”

“Is he going to be okay?” asks Logan.

“He’s lost a lot of blood. But he’ll recover. The strange thing is there was another mugging. Just now. A couple of blocks from here.”

“Well, I don’t have time to take you home.” He mulls it over then starts the car.

Two minutes later, our uncle pulls up to another alley. The paramedics are already loading the second victim onto a gurney. This man is also injured with knife wounds. But he’s conscious, and we lean out the window to get a better view.

The paramedics have bandaged up his lower back, where he’d been attacked, and the bandages are already soaked with blood. “I took out five hundred from the cash machine,” he tells Officer Monroe. “I didn’t see anyone behind me. But just as I’m going down the alley, I feel this knife. ‘Give me your money’ he says.”

“He told me not to turn around. I handed over my wallet and then he just stabbed me. Right in the back. For no reason.”

“So you didn’t see him? You have no description?”

The man looks a little sheepish. “When he was running away, I looked around and saw him from behind. He was around my size, I guess.”

“What was he wearing?”

The wounded man thinks. “He had a black sweatshirt and a baseball cap. Yankees, I think.”

“You can interview him later,” one of the paramedics says. “We have to get him to the hospital.”

Officer Monroe lets them go and together we watch the ambulance turn on its siren and race off toward City Hospital. “What are the odds?” he says, scratching his head. “A nice quiet town. Then we get two muggings at knife-point, within minutes.”

“Obviously,” says our uncle. “If only we had a good description.”

“I think I can help,” I say. When there’s just family around, I don’t feel so shy about speaking up. “Can you ask the officers to search around here? You know, for hiding places.”

Uncle J.B. looks puzzled. “You think the attacker is hiding out?”

“No, but I think he hid the knife. And other things. Somewhere between here and the place of the first attack.”

It takes a little persuading, mostly by Logan. “If Hunter says to search the area, you should do it.”

Officer Monroe makes us stay in the cruiser. He and two other officers start searching the alley, looking in Dumpsters and trash cans, even in a garbage pile behind a restaurant. Five minutes later, our uncle comes back to the cruiser. “Okay, boys,” he says very seriously. “How did you know this?”

“What did you find?” asks Logan.

“We found a bloody knife, a bloody sweatshirt, a Yankees cap, and two wallets full of money, one from each of the victims. Mind telling me what’s going on?”

Can you solve this one?

WHY DID THE MUGGER LEAVE BEHIND ALL THE EVIDENCE?

I’m nervous about telling a real cop my weird theory. But I clear my throat and start. “When we were at the first attack, you said something about the victim fighting back.”

“That’s right,” says Uncle J.B. “There were defensive wounds and a lot of blood.”

“Well, what if the mugger got injured? I mean, really injured. He would need to go to a hospital. But he couldn’t, because then he’d be a suspect.”

Our uncle agrees. “We always check emergency rooms when there’s a violent crime.”

“So, he had to find a way to get to the hospital without becoming a suspect.”

“He wasn’t a victim,” I say. “He was the mugger. He hid the knife and his bloody sweatshirt and cap. He also had to hide the wallets, in order for his story to make sense. His main concern was to save his own life and not get arrested.”

Uncle J.B. isn’t as easily convinced. “That’s a good theory. But you have no proof.”

“Right,” says Uncle J.B. “And that’s how the second victim described him.”

Officer J.B. Monroe is impressed. “It may not be enough for a conviction. But it’s certainly enough to get a subpoena for a DNA test. Maybe I should take you guys on more ride-alongs.”