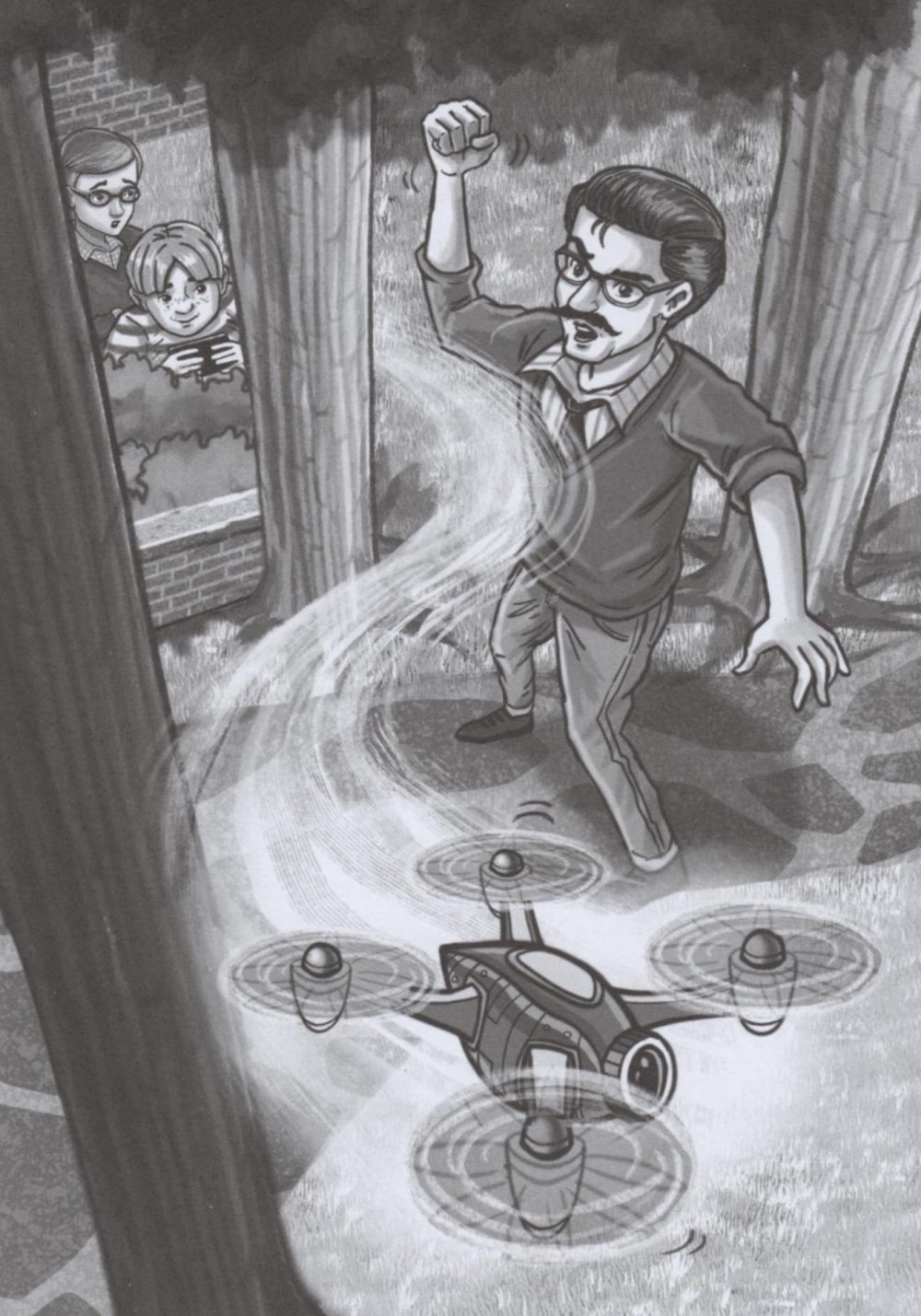 Derrick’s Uncle Nigel swats at the drone, hovering right in front of him. “Get that thing out of my face!” Derrick laughs. But he uses his smart phone to maneuver the little helicopter out over the rest of his family’s freakishly huge backyard. This doesn’t seem to be enough for cranky Uncle Nigel, who retreats back into the house.

“I gotta be nicer to him,” Derrick whispers. “Every few years, he just pops in from nowhere, hangs out around the house and spoils me rotten.”

We’re over at Derrick’s place, Logan and me and Ginny and Martin, checking out his latest gadget. Derrick loves everything new. “This footage is going to look great on Facebook,” he says. Just about everything Derrick does winds up on Facebook or Instagram, from his breakfast to the endless photos of Furrypaws, his overweight cat.

After a near-collision with a bush, Derrick lands the drone, picks it up and leads the way into the living room. He puts his phone down on the coffee table and puts the drone squarely on top of it. Then he rubs his hands together. “I just worked up an appetite. Anyone in the mood for eats?”

In the kitchen, we all attack the fridge and cupboards. In-between bites of greasy, leftover chicken, Derrick goes on and on about the drone – how expensive it was and how it instantly transmits so many gigabytes of video to his phone. Ginny looks annoyed. She gobbles down her peanut butter and jelly sandwich. “The only time you ever have us over is when you want to show off,” she snarls. Then she leaves, going through the door to the living room without even saying goodbye.

It’s an awkward moment. But Derrick pretends it never happened and starts going on about the new phone he wants to buy. “It’s much cooler than the one I have, with a better camera and a bigger screen.”

“Ginny’s right,” pipes up Martin, as he grabs the last piece of chicken. “You’d be a much nicer human being if you didn’t have so much stuff.” And with that, Martin storms out, too.

Now it’s a double-awkward moment. But Logan and I stick by our friend – until his bragging gets too much for even us. “We should go,” Logan says. Derrick follows us into the living room, still talking.

“You want to fly it?” he asks Logan. “I’ll let you fly it. It’s easy.” Derrick picks up the drone from the coffee table and then stops and makes a face. “Huh. I thought I left my phone here.”

Logan and I trade puzzled looks. We distinctly remember that he did leave his phone here, under the drone, right before we went into the kitchen. I look around the room and I can tell something’s wrong. The pillows are on different places on the sofa. The doors and drawers on the big cabinet are all open. And the coat closet by the front door is open.

“Huh,” Derrick says again. “Maybe I left it outside.”

“I hate to say this,” Logan says. “But someone stole your phone.”

It’s funny how a normal, boring afternoon can erupt into a mystery. “I knew Ginny and Martin were jealous,” says Derrick. “But I didn’t think they would steal.”

“Maybe they’re just playing a prank,” I suggest. “To get even for all the bragging.”

“Is anyone else in the house?” asks Logan. “What about your uncle Nigel?”

“Uncle Nigel’s a rich entrepreneur,” Derrick points out. “He lives all over the world. No, it has to be Ginny or Martin. You guys are detectives. Figure it out.”

Logan and I instantly turn into a couple of young Sherlocks. We check the coffee table and the messed-up pillows. We examine the open cabinet and the closet. Logan’s the one who discovers the tiny smear of peanut butter on the front doorknob. And I’m the one who identifies a greasy spot on the arm of a chair. It looks like chicken grease, though I can’t be sure.

We’re in the midst of checking under the chairs and sofa when Uncle Nigel comes downstairs. Derrick tells him what happened and Uncle Nigel has a couple of smart questions. “Why didn’t they take the drone? It’s worth a lot more than the phone. Are you sure it didn’t just get kicked under a table or fall behind a coach cushion?”

“I looked everywhere,” whines Derrick. “I can’t do anything without a phone. I can’t text or make a call or use my drone.”

“I’ll buy you a new phone,” says Uncle Nigel, solving the problem just like that. “You’ve been begging your dad to get you a new one, right?”

Derrick lights up like a Christmas tree. He tells his uncle how much the phone costs and Nigel opens his wallet and gives him more than enough cash. “I can’t leave because I’m expecting a business call from Hong Kong. But you should go out and get it.”

Ten seconds later Derrick is out the door, cash in his hand. We have a hard time catching up with him. “What about the crime?” Logan shouts.

“Ah, who cares!” says Derrick. “Either I lost it or someone pulled a prank. Well, the prank’s on them.” He checks his watch. “The store closes at five, so I gotta hurry.”

Logan and I are left alone in the Whitfords’ driveway, watching Derrick disappear down the street on his bike. “It’s too bad,” I say. “If he’d waited a few seconds, I could have told him what happened to his phone.”

WHAT HAPPENED TO DERRICK’S PHONE AND WHO IS RESPONSIBLE?

WHAT CLUES DID HUNTER NOTICE?

Logan doesn’t seem very excited by my news. “What does it matter?” he says. “If it was a prank or a theft or if the phone got lost, Derrick’s getting a new one.”

“It probably matters a lot,” I say, “though I’m just guessing why Uncle Nigel did it.”

“It has to be,” I say. “Everyone else saw Derrick put the phone under the drone. But the thief looked under cushions and in drawers and in closets. Uncle Nigel’s the only person who would need to search. Plus, I think he lied about his business call to Hong Kong. It’s the middle of the night there. Like 4 a.m.”

“I’m confused,” says Logan. “Why would he steal Derrick’s phone and then buy him a new one?”

“Because of something on the phone.” I’m guessing here, but it’s a good guess. “Remember how he didn’t want the drone taking a video of him? Derrick was going to post it on Facebook. Maybe Uncle Nigel is into some shady deals and he doesn’t want his face and name plastered all over social media.”

It’s an easy theory for us to check. We go back in the house. Logan secretly takes a photo of Uncle Nigel and we lift his prints from a water glass. Then we take it to our own uncle, J.B. Monroe of the Clifton Lake P.D.

By the next morning we have our answer. Turns out Uncle Nigel is a con artist, wanted in Texas and hiding out with his family for a while until things cool down.

Derrick’s family is really upset. But Derrick takes it okay. After all, he has his new phone. And that’s what matters.