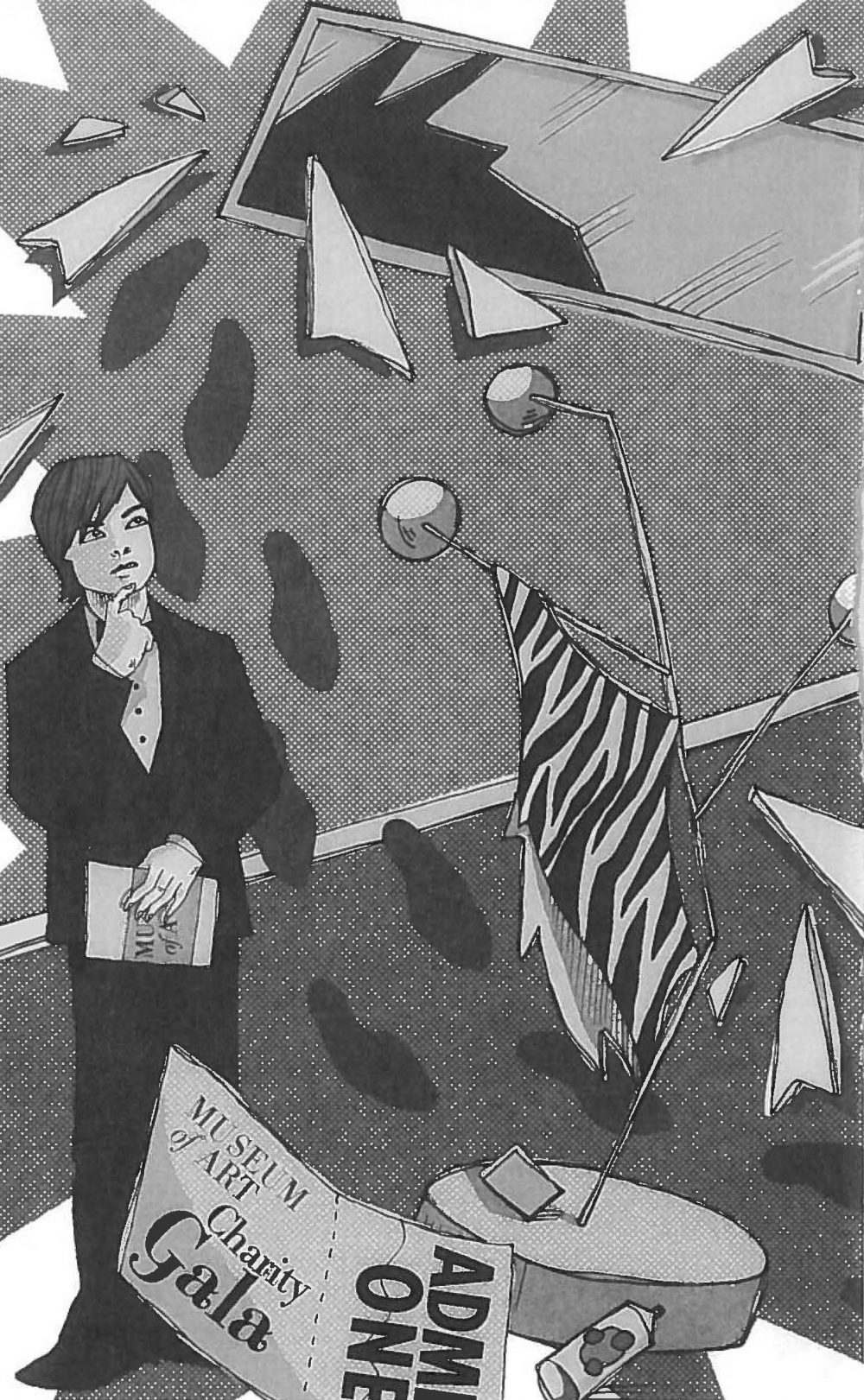 Jonah waddled back and forth in front of the museum, pretending to be outraged by the rented tuxedo. In reality, though, Jonah thought it was kind of cool being dressed up like James Bond and taking part in his first undercover assignment.

“Jonah, stop,” Carol Bixby hissed as she straightened the straps of her formal gown. “The first rule is not to draw attention to yourself.”

“Sorry.” Jonah didn’t blame his mother for being upset. After all, she and the other police detectives had worked long hours to ensure that tonight’s event ran smoothly.

The event was a charity gala featuring five newly acquired sculptures. They were modern pieces and each statue was accented in real fur. That was why the museum needed such security. Anti-fur protestors were picketing the museum, and some had even threatened to crash the gala and destroy the offending works of art.

At the front of the line, Jonah handed the guard his long rectangular ticket and got in return the ticket’s torn square stub. Then he and his mother stepped through metal detectors and underwent a bag search. Once inside the grand lobby, they blended in with the other formally dressed guests, except that Detective Carol Bixby wore an earpiece and had a police-issue handgun in her fancy little purse.

The crowd was just beginning to wander back toward the exhibition rooms when her earpiece began to squawk. “Silent alarm,” a voice informed her. “Exhibition Hall J.”

“The statue room,” Carol whispered to her son and started sprinting in that direction. Jonah followed and so did two other undercover “guests.” All four of them wound their way through the labyrinth of hallways and arrived at about the same moment, rushing into Exhibition Hall J and finding it freshly vandalized.

Jonah saw the five statues in the center of the room, each one with a red “X” sprayed across it. On one of the walls was a message, also in red paint. “Fur Is Mur…” it said, the last letter trailing off into nothing.

Carol Bixby scanned the room, then pointed to a window high in the wall. The glass had been shattered, and footprints on the marble floor showed where the intruder had jumped down into the room of statues. Near the doorway was the abandoned can of spray paint and a pair of plastic gloves.

“How did he get out?” one of the plainclothes officers asked.

“He didn’t,” Carol said. “It’s been less than a minute since the broken window triggered the alarm. He barely had enough time to jump to the floor, do his damage with the paint, and run off. He must still be in the museum.”

A sudden flash of cameras alerted them to the photographers gathered around. The reporters who were there to document the gala opening now had a bigger story on their hands. The vandals had won, Jonah thought. They had gotten their publicity.

Half an hour later, Carol Bixby and her son were in the museum office, interviewing witnesses.

The first was the City Council member Grover Prescott, who had been a vocal opponent of the fur exhibition. He was in a dark brown suit, one of the only guests not in formal wear. “Right after I got through security, I went to use the bathroom,” the councilor told Carol. “I was just coming out when I saw this man run by. A young guy in a tuxedo, that’s all I could see. A couple seconds later, you and your people came running from the other direction.”

The second witness was Rhett Aronson, a young animal-rights activist. “And just what are you doing here?” Carol demanded.

“I have a right,” Rhett protested, taking from his pocket the same long rectangular ticket that everyone else had used to gain admission. Jonah looked at the man’s feet and saw that he was wearing black fabric shoes and not the typical patent-leather tuxedo shoes.

The interview was interrupted by a uniformed officer. “We sealed the doors as soon as we could,” he reported to his superior. “He must have already made his escape.”

As soon as the officer and the activist walked out, Jonah leaned over to his mother. “The bad guy didn’t escape,” Jonah whispered. “He’s still in the museum.”

WHO IS THE SPRAY PAINT VANDAL?

WHAT CLUE DID JONAH NOTICE?

“What makes you say that?” Carol asked. “Is it his shoes? You know, Jonah, a lot of animal rights people don’t wear leather. Just because Mr. Aronson looks like the obvious choice and is wearing different shoes…”

“No,” Jonah said, “it’s not that. It’s his ticket. When we came in  tonight, they tore everyone’s ticket. But Mr. Aronson’s ticket is still l long and rectangular. It wasn’t torn. That means he didn’t come  through the main entrance. He couldn’t have. He came through the broken window.”

Carol Bixby thought for a moment. “You’re absolutely sight. Aronson knew he’d be a suspect, so he had to have a ticket to show us, but he neglected to tear off the stub. Good job.”